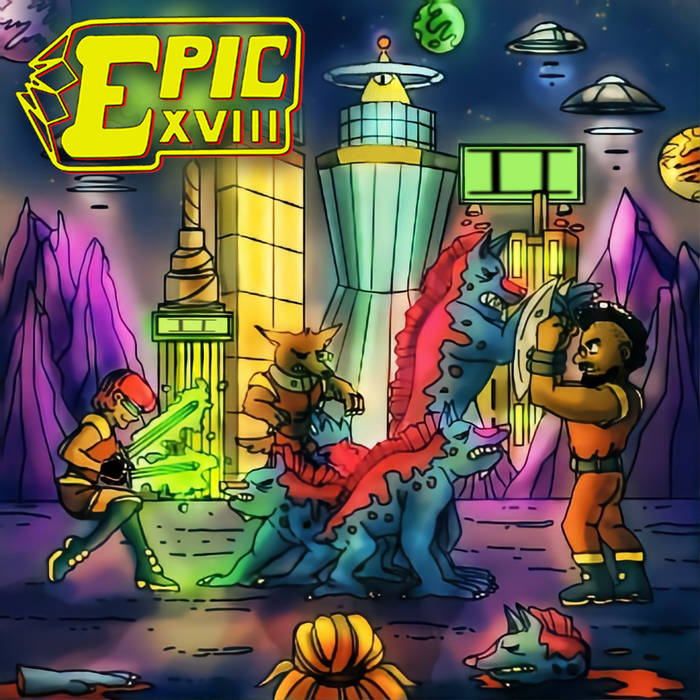 EPIC XVIII is back at it again with a shiny new gem of an album in “II.” Artfully pieced together over the span of about a year, “II” is a time machine of an album, taking you back, forward, up, down, and all around time and space. So buckle up, horn-thirsty travelers, you’re in for a treat.

“II” begins with the upbeat and ska-rrific “Truth,” arranged by guitarist Austin Chavarin. Taking listeners back to that classic 90’s ska, “Truth” sets the tone for the album being an unofficial rulebook of how to navigate through life’s difficult challenges. Still, “Truth” puts the listeners in their seat and points to horizon and says “This is what’s to come.”

And just when you think you’ve gotten settled, EPIC XVIII kicks it into high gear with the fast-paced and mercurial track “Going.” This song will get your blood pumping, your legs moving, and your fist jumping as you jam to that banging horn-line, not to mention el grito de Klandestino!

Next up is the inspiring and encouraging “Pass it.” Written by lead singer and baritone saxophonist, Adam Marquez, “Pass it” is definitely a clapper of a song that makes you feel like you can take on anything (and still have time to dance around afterwards).

“Make it Right” is EPIC XVIII’s latest single that they are very proud to include in “II.” This song is genuine, catchy, and an all-around good time for listeners of all ages. Listen to the music and let the joy sink in, then listen to the words and let the good times roll!

But first, villains beware! EPIC XVIII has another song for all you superheroes out there (and we know there are a lot of you out there!). “Fight on!” is the result of EPIC XVIII defeating their flat-footed archnemesis Divides By Zero, letting citizens everywhere know “We won’t let the music stop!”

And now, “Now.” Starting with the bassline from “Doc” Martino, “Now” gives you that itch to jump around, then soothes that itch with a reggae-esque ending that brings you back to-- well, now.

This is smoothly followed by the reggae-inspired song “Woke.” This song will slow things down enough for you to think about what’s being said, all while being surrounded by a palliative sound, highlighted by the trumpet of Logan Alvarado.

From “Oy Vey” to “Dios mio!” EPIC XVIII offers you their Latin-rock sound as Marquez sings con carazon about his infamous and legendary uncle, “Tio Alejandro.” Sing along as they belt out the chorus while Marquez sings in his finest Spanish.

Penultimately is a song about F. Scott Fitzgerald’s The Great Gatsby entitled “J. Gatz.” With the lyrics written by keyboardist Eli Moreno-Drew, “J. Gatz” transports listeners to one of Gatsby’s famous soirees through the eyes of Nick Carraway, giving listeners excellent imagery while they sip on bootlegged liquor.

Last--but absolutely not least-- is “Life.” For copyrighting purposes, you’ll just have to guess which classic video game this song is about, but once you do, you’ll be all-the-more impressed. “Life” takes you back (if you’re old enough!) to those days when we’d huddle around a TV screen and raced to our heart’s desire (wink wink).

Thus ends “II.” This album was written, as stated earlier, over the course of about a year and was all developed, fine-tuned, and recorded in-house. It was a collaborative effort on all member’s parts, each bringing their unique sound and experiences to the table. Their hope is that you have as much fun listening to this album as they did creating it.

The ska your mother warned you about.

Bandcamp Daily  your guide to the world of Bandcamp

Featuring Gary Bartz, 5 years of Rhythm Section Intl and an LP of the week by Nicolas Jaar